by SRS Admin
breed, dog, research, sydneyrussellschool
Comments are off 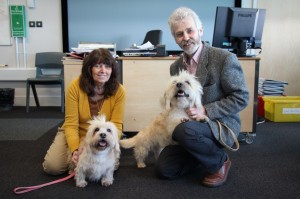 On 24th February 7FT had four very unusual visitors.  Mr and Mrs Keevil, two world famous breeders of Dandie Dinmont terriers, came to give a talk about the breed to help the students with their research project.

Although the talk was entertaining and informative, the highlight for everyone was meeting two of their dogs, Scarlet and Jackson.

The moment I saw the two little furry doggies walk through the door, my excitement was too much to bear!  I just wanted to stroke them and hug them!  Fortunately, I did!  Sumiyyah

As soon as Scarlet and Jackson walked into the room, I fell instantly in love with them.  Kiera

I enjoyed the visit of the Dandie Dinmonts because I learned a lot about the breed.  It was brilliant to see examples in person as they’re very rare and only about a hundred puppies are born in Britain each year.  Finlay

I enjoyed meeting the Dandie Dinmonts.  Their big eyes and wagging tails made them look so adorable.  The most exciting part was when we got to feed them.  Later, I watched Jackson playing hockey with a rubber chicken on YouTube; it was hilarious!  Suvika 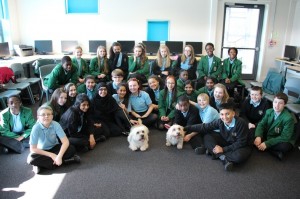 The best bit, I think, was when Jackson lay down in front of me and let me stroke his tummy.  Ellie

My favourite moment was when Mr Keevil told us he had won Dandie Dinmont look-alike competitions.  I didn’t even know there were competitions like that.  I also found it funny when Mrs Keevil, who was also a groomer, told us what kind of haircuts you could give the dogs.  I found it awesome that a dog could have a Mohican!  Joshua

I loved feeding Scarlet and Jackson because their cute little tongues licked my hand as they tried to pick the treat up.  I am trying to persuade my Mum and Dad to let me have a Dandie Dinmont; it’s not going well but I will carry on trying as I would love to have one.  Laura 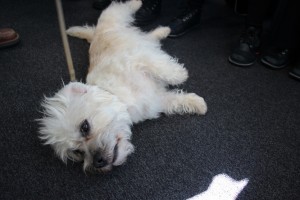 The texts that we have studied were right about Dandie Dinmonts liking a lot of attention: Scarlet and Jackson were more than pleased to go and meet everyone and they weren’t shy.  They were very obedient because they stood still for the photographs and did what they were told.  Leah

Scarlet was my favourite dog.  She looked like a princess with her pink lead.  Jackson was adorable too: he had amazing eyes.  Zaina

I’ve always liked dogs.  I enjoyed it when Jackson and Scarlet came up to me and stayed with me whereas they walked past other people.  Sam