by SRS Admin
bike, Polo, Winners
Comments are off

We are very proud show for our brave Year 7 Bike-Polo team who became the top Barking & Dagenham side at the SUSTRANS Inter-Schools Bike-Polo Tournament at Hainault Power League yesterday. They won our school a first trophy in this sport.

Whilst we were defeated (6-3) in the quarter-final by a strong, well-organised and experienced side from the Valentines High School, our students did exceptionally well in winning their remaining games. Our most satisfying result came in the hard-fought plate semi-final victory over All Saints School (winning with a 5-0 score line). In the plate final we defeated the Oaks Park school by winning 6-5 in the final seconds of this particular game. 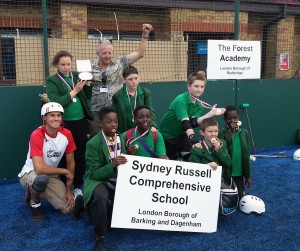 I’m sure you all share my pride in “our team” who were at a disadvantage in being something of an inexperienced, “scratch” team of year 7 pupils who hadn’t played this sport before and, often due to various timings/commitments, hadn’t trained on a consistent basis. They certainly performed beyond our expectations in the way they played each 10-minute game. Most other schools had adapted bikes/equipment and had played in previous cycle polo events.