Last week, there was another demonstration of one of the things that makes Sydney Russell an outstanding school: our Music Department. There were two performances of the Spring Concert: one on Wednesday evening for staff, students and parents and one on Friday morning for students in the Primary Department; their parents and twenty-nine students from Parsloes Primary who will be joining Sydney Russell in September. Students from Years Seven to Thirteen performed; there were choral, instrumental and orchestral pieces, including students’ own compositions; popular and classical music. The standard of the performances was extremely high, as we’ve come to expect from our musicians and singers. Three of the pieces were especially impressive, however, and demonstrated how much the Music Department has achieved. 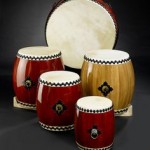 The Percussion Ensemble always produces one of the highlights of our concerts but this time the performers surpassed themselves. Huw Williams, our drumming teacher, had arranged a traditional Japanese piece, Taiko, which required physical agility as well as musical ability. The Ensemble: Tori B., Takara H., David H., Peter O. and Elizabeth W. performed it faultlessly and received rapturous applause.

The orchestra, with Reece F. as First Violinist, played Mambo from West Side Story, a familiar but technically demanding piece. The musicians, conducted by Miss Edwards, rose to the occasion magnificently and it was hard to imagine how the final piece could match this or the performance of Adiemus at Christmas. Well! The massed choirs and chamber orchestra, conducted by Ms Ambrose, gave a performance of Carl Orff’s Carmina Burana so amazing, the audience gave it a standing ovation. It was so good, the Principal Ms J Davies demanded an encore.

Friday’s concert was, if anything, even better. It certainly had an additional element: students from the Primary Department gave a performance before taking their seats in the audience.

Congratulations to all of the music department for their hard work and commitment to excellence. Thank you also to the teachers who participated in the concert, and all the staff who attended the performances.

Janis Davies
At Sydney Russell School we uphold the traditional values of strong discipline, school uniform and a demanding classroom ethos. At the same time we are totally committed to the best use of 21st century computer technology to help teaching and learning. Our first priority is the development of every child's academic potential to the fullest.