On Monday 10th December 2018, I attended a prestigious poetry event at the House of Lords and was rewarded for coming second in the “12-15 years old” category. Here, I explain how this opportunity came about and my experience of the ‘Vision of Hope’ peace poetry event. 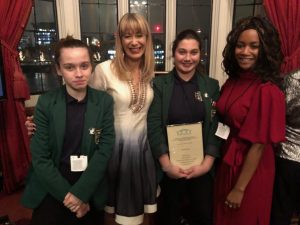 Before breaking up for October half term, Miss De Gouttes, our library teacher, introduced my class to a competition called the “National Schools Poetry Competition for Peace”, which hopes to inspire young people to create a peaceful world through poetry. When I first heard of the competition, I wasn’t interested because I thought poetry was hard: I was put off by the need to rhyme every single line. However, I soon found out that not all poetry rhymes and, quite often, concentrating on rhyme can limit a poem. With this new knowledge, I decided to give it a go.

After the half term, we learned that the founder of the competition, Tally Koren, was coming to the school to run two workshops (one for Year 7 and one for Year 8) and one of us would be able to go. In order to determine who should represent our form, we held a mini-competition. My friends knew that I wrote a poem, but I was a little shy, and so they chanted my name to go up and read it. I didn’t really want to go up, but somehow found the courage. I read my poem and, after an anonymous vote, I was selected to represent my form. 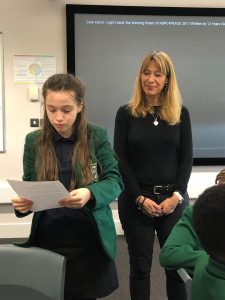 Working with Tally was a great experience. She read the 2017 winner’s poem and then played the song that she wrote after having been inspired by one particular line. We also heard the 2017 second place winner’s poem, which belongs to my friend Billie, who was also in the workshop. I was particularly inspired when Tally said that we should write whatever we think and feel when we hear the word “peace” and based on the workshop, I improved my poem and submitted it. Two weeks later, I learned that I had come second place!

On Monday 10th December, accompanied by Miss de Gouttes and Ms. de Gray, Billie and I went to the House of Lords for the ‘Vision of Hope’ poetry event. I was amazed and shocked; I thought that the event was going to be held in a building close to the House of Lords but no, we went right inside! The event was held in a beautiful room that overlooked the Thames. We were served soft drinks and food before listening to speeches from inspiring CEOs, religious leaders, peace ambassadors and the founder, Tally Koren. We listened to the winners’ poetry and then received certificates for winning or being the runner up.

I am really proud of myself for achieving something this great and having the opportunity to attend a private event at the House of Lords. I will keep trying to write and I hope that other children will too, because if you don’t give something a go – despite whether you think you like it or not – then you’ll never know what destiny has in store for you.