Rush of the titans: supersize secondary schools for surging population 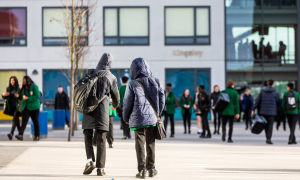 It’s breaktime at Sydney Russell school in Dagenham, east London, on the day before national offer day, when primary school pupils find out whether they have got into their first choice of secondary school, and the students in their emerald green blazers begin to emerge from all directions, spilling out of dozens of classrooms across the vast site.

Sydney Russell is one of a growing breed of so-called “titan” schools – supersize secondaries – which are being rolled out across the country in response to the growing demand for places caused by increased birth rates. 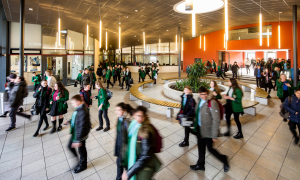 First it was primary schools that were forced to expand rapidly; now the bulge is moving into secondaries, with more than 300,000 additional secondary pupils expected in the system by 2020, putting unprecedented pressure on schools and local authorities. Sydney Russell is playing its part and now has 1,900 pupils.

Like many other schools this year, Sydney Russell received more applications than ever before. Just under 1,500 children applied, of which almost a third made it their first choice. Though the school is one of the biggest in the country, with a 12-form entry offering 360 places in year 7, many families will still be disappointed to find they have not got their preference.

Roger Leighton was head of Sydney Russell until last October and has overseen the massive expansion programme with a new £2.4m block plus a £25m rebuilding programme funded by the now defunct Building Schools for the Future programme.